Water Matters > Help > Contaminants > A
a

Acrylamide (or acrylic amide) is a chemical compound with the chemical formula C3H5NO. Its IUPAC name is prop-2-enamide. It is a white odourless crystalline solid, soluble in water, ethanol, ether, and chloroform.

Acrylamide serves as a raw material (monomer/building block) for manufacturing polymeric coagulant aids for use in drinking water treatment. Other uses include improving production from oil wells; making organic chemicals and dyes; sizing paper and textiles; ore processing; and construction of dam foundations and tunnels.

Some people who drink water containing high levels of acrylamide over a long period of time could have problems with their nervous system or blood, and may have an increased risk of getting cancer.

Alachlor is a widely-used herbicide applied to corn, soy and sorghum; it is carcinogenic to animals and potentially carcinogenic in people.

Some people who drink water containing alachlor well in excess of the maximum contaminant level (MCL) for many years could have problems with their eyes, liver, kidneys, or spleen, or experience anemia, and may have increased risk of getting cancer.

An alpha particle is identical to a helium nucleus having two protons and two neutrons. It is a relatively heavy, high-energy particle, with a positive charge of +2 from its two protons. Alpha particles have a velocity in air of approximately one-twentieth the speed of light, depending upon the individual particle’s energy.

The health effects of alpha particles depend heavily upon how exposure takes place. External exposure (external to the body) is of far less concern than internal exposure, because alpha particles lack the energy to penetrate the outer dead layer of skin. However, if alpha emitters have been inhaled, ingested (swallowed), or absorbed into the blood stream, sensitive living tissue can be exposed to alpha radiation. The resulting biological damage increases the risk of cancer; in particular, alpha radiation is known to cause lung cancer in humans when alpha emitters are inhaled. The greatest exposures to alpha radiation for average citizens comes from the inhalation of radon and its decay products, several of which also emit potent alpha radiation.

Antimony is a metal found in natural deposits such as ores containing other elements. The most widely used antimony compound is antimony trioxide, used as a flame retardant. It is also found in batteries, pigments, and ceramics/glass.

Some people who drink water containing antimony well in excess of the maximum contaminant level (MCL) for many years could experience increases in blood cholesterol and decreases in blood sugar.

Arsenic poisoning is a well-known phenomenon. It is considered to be a metalloid, chemical element, but it can also be present in a crystallized form on its own. There are actually less potent compounds derived from the chemical that have myriad industrial uses in both the medical field and the military. Erosion of natural deposits and runoff from orchards, glass and electronics production, and waste can introduce it into the water supply.

The EPA keeps a sharp eye on this contaminant. Some people who drink water containing arsenic well in excess of the MCL for many years could experience skin damage or problems with their circulatory system, and may have an increased risk of getting cancer.

Asbestos is a mineral fiber introduced into water by the dissolution of asbestos-containing minerals and from decay of asbestos cement in water mains.

Because asbestos fibers are resistant to heat and most chemicals, they have been mined for use in more than 3,000 products, including roofing materials, brake pads, and cement pipe often used in distributing water to communities. Asbestos is found in many building products, roof shingles, tiles, textured paint, artificial ashes and embers sold for use in gas-fired fireplaces. Older products such as stove-top pads , Walls and floors around woodburning stoves may be protected with asbestos paper, millboard, or cement sheets, Asbestos is found in some vinyl floor tiles and the backing on vinyl sheet flooring and adhesives, Hot water and steam pipes in older houses may be coated with an asbestos material or covered with an asbestos blanket or tape, and Oil and coal furnaces and door gaskets may have asbestos insulation.

From studies of people who were exposed to asbestos in factories and shipyards, we know that breathing high levels of asbestos fibers can lead to an increased risk of: lung cancer; mesothelioma, a cancer of the lining of the chest and the abdominal cavity and askestosis, in which the lungs become scarred with fibrous tissue. 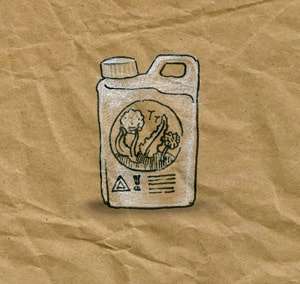 Atrazine is a widely used herbicide for control of broadleaf and grassy weeds. Effective in 1993, its uses were greatly restricted.

Some people who drink water containing atrazine well in excess of the maximum contaminant level (MCL) for many years could experience problems with their cardiovascular system or reproductive difficulties.

Contaminants You Should Know