If you’ve ever seen a layer of neon green or yellow algae floating in a body of freshwater, you’ve seen an algal bloom. Algal blooms are overgrowths of algae most popularly known as pond scum or by their proper name: cyanobacteria. Luckily, pond scum is gross enough (and can smell bad enough) to drain anyone’s dreams of afternoon swimming immediately, because coming into contact with it can have health consequences. It’s easy to imagine an algal bloom as a radiation monster in a 1950s B-movie. Surely, it’d be called: The Cyano Monster. Picture the trailer. A deep voice intones, “The Cyano Monster lurks in swimming holes and shower heads, full of toxic bacteria that terrorizes unsuspecting water users, infecting them in a single wiff!”

It’s not as dramatic as all that, of course, but algal blooms are definitely still something to be cautious about, as they’re made worse by global warming and can have big effects on freshwater sources.

The Creature From The Algal Bloom 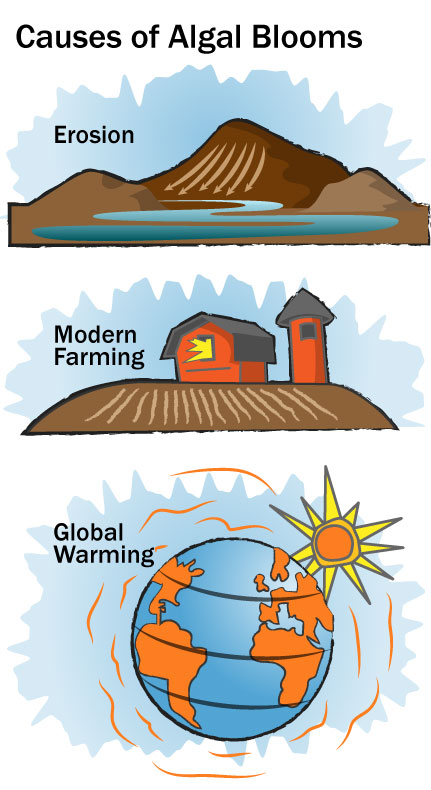 green, either. Toxic algal blooms can be many colors, including orange and brown and sometimes even (for those of us who appreciate 90s biker shorts) an especially bright neon green.

How, exactly, do algal blooms, well, bloom? Much like a B-movie monster, many of them are created unsuspectingly by human activity. They grow when there’s an excess of phosphorus, nitrogen, or carbon in freshwater, which provides them plenty of food and allows a little baby algal bloom to grow up healthy and strong into a monstrous Cyano Monster. In other words, they grow out of control, and that’s when they cause problems in water for people — both in good drinking water and water for recreational use.

Let’s back up for a second, though. How does the phosphorus and nitrogen get into the water in the first place? A number of things contribute to forming our Cyano Monster. Sometimes this overabundance of phosphorus and nitrogen find their way to our water through erosion (which sends nutrients into the water supply at a much faster rate than normal), but more often it’s from agricultural runoff such as an overuse of fertilizer and manure in commercial farming practices. Tom Curtis of the American Water Works Association recently told the publication Water Works that some commercial farms “use four to five times more fertilizer than the soil can absorb, and the rest just runs into waterways.” That’s right: fertilizers used in large-scale farming are a big part of forming — cue the 50s sci-fi horror movie music — the Cyano-Monster. And unfortunately, the Clean Water Act mostly doesn’t cover agricultural practices, so there aren’t many laws preventing fertilizer overuse.[1]

As with many water concerns, there are a few more things exacerbating the growth of algal blooms, helping them get bigger than they ever have before. Global warming receives a gold star for its hand in forming larger, more dangerous algal blooms. Cyanobacteria flourish in warmer weather, for starters, but also get a big help from more severe rainfall which pushes those excess farming fertilizers into larger water bodies. On top of it, the increase in wildfires — most definitely due to global warming — also speeds erosion.

The algal monster itself isn’t the part of an algal bloom that’s toxic, though.

When an algal bloom grows out of control, the cyanobacteria don’t just bow out gracefully. As those cells die off, they leave behind and release something called a “microcystin,” which is the bacteria that’s harmful to people and aquatic life. (Why doesn’t the actual bacteria, microcystin, have the word “bacteria” in its name? I guess scientists wanted to keep it extra confusing — ahem, I mean fun.) According to the EPA, those microcystins can remain in the water for “weeks to months.”[2] So what happens when algal blooms and drinking water meet? Well, the state of Ohio has already seen water pollution lead to an attack by (cue that ‘50s sci fi music again) the Cyano Monster. 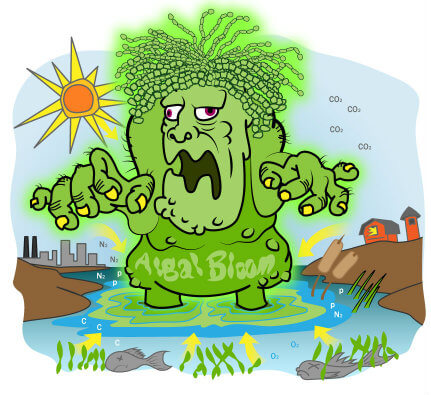 Where The Cyano Monster Strikes

While the spread of algal blooms isn’t yet a widespread problem, American cities are finding themselves dealing with cyanobacteria more than in the past. In the summer of 2013, Ohio’s Carroll Township had an outbreak of toxic microcystin that led to six people having gastrointestinal problems. Townsfolk were ordered not to use the water for drinking. The following August in 2014 the city of Toledo, Ohio declared an emergency after microcystin were found present in their water. In this case, 110 people were sick, and 400,000 left without potable drinking water for three days. The source in both cases was an algal bloom that stretched for 400 miles across Lake Erie, where much of Ohio draws its drinking water.[3]

Sadly, microcystins have more pathways into the human body than the classic route through drinking water.

Microcystins can be inhaled in addition to being ingested, so algal blooms can have large impacts on recreational water usage as well. The health problems they wreak are fairly wide-ranging, including breathing problems, gastrointestinal issues like nausea, vomiting, and even diarrhea.

Those who breath in droplets of microcystin-contaminated water (which can happen in many scenarios, from the shower to the beach) can suffer coughs, chest pain, and symptoms similar to the common cold like a runny nose and asthma-like symptoms. Have no fear, though, it’s still possible to be affected by microcystins even if you don’t drink them in! Skin contact with them can also cause rashes, hives, and even skin blisters. (Gross.) In extreme cases, exposure to large amounts of those lil microcystin buggers can cause liver damage. 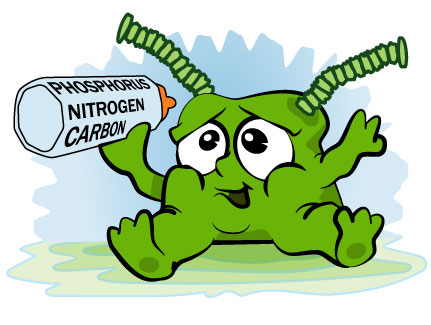 There are a number of factors that affect the degree to which water treatment facilities can disinfect microcystins. Chlorine has been shown to be an effective treatment, as long as the water’s pH level is below eight. Carbon filters have also had some success in filtering out microcystins, but a UV light is the most powerful at killing off the Cyano Monster. The problem, though, is that many older treatment plants weren’t designed with treating microcystins in mind and retro-fitting them can prove costly. In the case of Toledo, the city’s water plant couldn’t filter out or kill the cyanobacteria, and thus the local municipality issued a warning to all residents not to drink the water.

Stop the Cyano Monster and its Nefarious Microcystins

Given the importance of water in every person’s day-to-day existence, it’s best not to let the Cyano Monster grow too powerful, and there’s many actions ordinary citizens can take to ensure they have good water quality. Start by urging your elected representatives to regulate agricultural runoff and lay down rules for fertilizer usage by including agricultural runoff in the Clean Water Act. It’s less expensive in the long run, and holds agricultural producers more responsible for the consequences they’re currently forcing taxpayers to pay for through water treatment.

Look into the health of your local water sources. Ask how much they’re affected by agricultural runoff and what treatment plans your municipality has in the case of any toxic algal blooms forming. Follow local water warnings and look into when your local water treatment plant was built. Many older water treatment facilities weren’t constructed with disinfecting for microcystins in mind, but you can protect yourself within your own home. If you live within a watershed (like, say, Lake Erie’s) that has struggled with algal blooms or if you’ve noticed pond scum in your local water sources, consider getting a water filtration system that covers all waters taps in your home. And lastly, do what you can to safeguard vulnerable populations. If members of your household are infants, children under six, pregnant women, or elderly, they’re considered more vulnerable to toxic microcystins and that’s all the more reason to seek out in-home water filtration. After all, when the Cyano Monster comes knocking on your door, you want the right ray gun (cough cough, UV light) to strip him of his toxic powers and send him far, far away from the watery depths.