Wildfires And Drinking Water Can Be A Dangerous Combination

If natural disasters were musical genres, wildfires would be hair metal. In fact, it’s pretty surprising that no enterprising rock band has ever taken the flashy inspiration to name themselves “Wild Fire.” (Wait. Never mind.) Wildfires are the head-banging, pyrotechnics-loving rock of the natural world, but far far less fun and definitely not a reunion tour anyone wants to catch.

Unlike the smoke generated at an 80’s glam rock concert, smoke from wildfires isn’t benign or contained, and in fact can travel straight into drinking water.

Smoke In The Water, Literally

Homes and entire lives in Bastrop, Texas were completely decimated in a huge wildfire in 2011 — the largest ever to hit the state. It took over a month to contain, and by the end, 1600 homes were destroyed and more than five thousand acres of Bastrop State Park were gone. But as Texans surveyed the damage, the fire’s impact on Bastrop’s water supply was a less obvious concern lurking beneath the scorched earth. Devastating wildfires reach far beyond the immediate damage to homes, neighborhoods, and parks where they’ve raged, affecting not only air quality, but less obviously, water quality, too (as if the fire itself isn’t enough).

The extent to which a blaze affects the water supply depends on the severity, intensity (i.e. how hot the blaze is) and duration, so predicting the impact is more art than science. The list of ways in which wildfires can add to the global water crisis seems sadly endless. There’s erosion, ash easily picked up by winds and chemicals that come from both the fire’s remains and the materials used to fight a blaze. All these and more can travel further than Guns ‘n’ Roses’ last world tour. In the case of Bastrop State Park, erosion reduced available oxygen in the lake, forcing park officials to pump it in artificially. 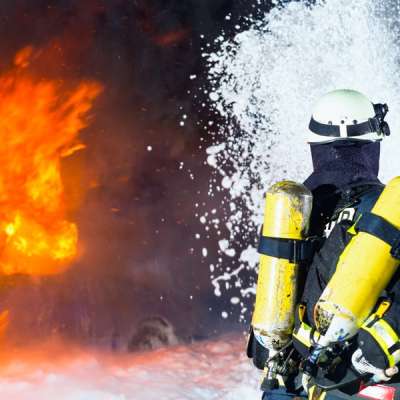 In California, erosion concerns are even higher, especially after the most recent and most devastating fires in northern California. After the drought-prone summer and fall, California received a deluge of rain in winter and spring, and all that water following on the heels of the fire had nowhere to go. This is partially because wildfires destroy the forest floor, so when precipitation arrives, the liquid can’t penetrate the soil.

To add to this conundrum, a fire can create what’s called “hydrophobic” soil, which is just like it sounds: it becomes impermeable to water, so all that rain rushes into sediment and debris that gets into citizens’ water, and it can stay there longer than many flash-in-the-pan rockers’ careers.

According to the Water Research Foundation, watershed recovery “generally takes four to eight years, and streams can be affected approximately four to five years after a fire.”

Imagine having excess nitrogen and phosphates in your water supply long enough for Metallica to release three albums.

Adding to this, fire fighters must use more than water to tame a widespread blaze, and the chemicals contained in fire retardants can find themselves in drinking water as well. Mixtures used to smother flames often contain nitrogen and ammonium sulfates in large amounts, which can be lethal to aquatic life. Nitrogen causes overgrowth of algae, which might sound great for fish at first — hey, more food, fishies! — until you realize that this overgrowth hogs most of the oxygen, suffocating those very fish. (Sorry, little guys.) Moreover, excess nitrogen is also harmful to humans where it can restrict the flow of oxygen in the bloodstream, and can be lethal to infants less than four months, who have yet to develop an enzyme that corrects the condition.

The California fires also burned their way into cities and “Urban Ash” creates a much more toxic threat than solely organic matter. Households contain much more dangerous inorganic material, such as home electronics, which produce a different kind of ash that’s laden with even more unsavory compounds. Lance Klug, a spokesman for the California Department of Resources and Recycling spoke to CNN about the fires, explaining the concern is that ash “can contain harmful amounts of heavy metals.” And unfortunately, the kind of rock I’ve been referencing for the last half a page isn’t the metal Klug means. He’s talking about elements that, further down the chain, lead to water pollution. Klug estimated cadmium, zinc, copper, antimony, arsenic, and — everyone’s favorite toxic buddy — lead were among the post-fire metals to enter the watershed. And if winter California rains come before officials are able to do some serious cleanup, the pollutants will be headed straight for the state’s storm drains and rivers. That is, if that ash hasn’t been picked up by the wind and carried even further away.

And yes, water carrying those metals goes through a water treatment plant before it hits domestic taps, but experts are concerned that the sheer amount of ash to be filtered after a huge fire could overwhelm those systems.

We’re Not Gonna Take It: How To Take Action

Unfortunately for the everyday citizen, the biggest actions you can take to prevent downstream pollution from wildfires come in the form of good ol’ fire prevention. Obey local burn bans. For real. Those fireworks might be fun and celebratory, but in drought-prone areas, one spark in some brush is all it takes. Don’t worry — outdoor open flame cooking is still permitted during a burn ban so long as the flames are contained within the device. So that July Fourth cookout will be fine. Speaking of brush, clear any dead plants or trees on your property to protect your home from easily combustible material. Those quite literally add fuel to the fire. Often, local municipalities will pick them up for free. 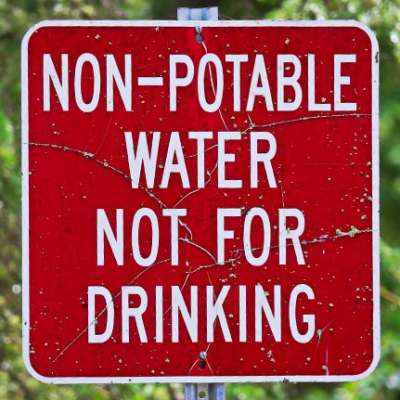 After a wildfire rages through an area is a different story, though. If your home is affected, you’ll likely have to get city approval and remove of much of the debris before you re-enter, and you may need to bring in professional hazardous waste removers. Be sure to wear a purifying respirator – no one wants to breath in toxicity. Make sure everything you remove is properly dumped in a waste facility that handles toxic materials. This reduces and prevents toxic elements heading in the water supply. Pay attention to local boil water warnings and follow them if issued. Using a UV light also disinfects water, which is particularly helpful to anyone who draws their water from a well. Lastly, consider filtering your water in-house. It will help keep those heavy metals on the oldies station (hey, we all gotta accept it) and out of your family’s water.