Survey Reveals Why More Americans Than Ever Are Filtering Their Water

In honor of National Water Quality Month each August, we survey Americans about their drinking water concerns and habits with the ultimate goal of spreading awareness about water quality issues and helping people find solutions they can trust.

This year’s survey marks the fourth iteration, and over the last several years our data has revealed a trend among Americans: water filtration is becoming increasingly popular.

In 2022, we found that 77% of Americans filter their drinking water at home, a figure that’s steadily grown each of the past three years:

To understand why Americans are filtering their water at an increasing rate, we’ve analyzed data from our March 2022 survey of 2,246 U.S. adults and compared the results to findings from previous years. Learn what’s driving Americans to filter their water with insights on top water contaminant concerns, post-COVID-19 behavioral shifts, environmental concerns, and trust in water quality.

For the last three years of our survey, we’ve asked Americans what their number one water contaminant concern is. Historically, lead has remained the top concern, although in 2021 there was a noticeable spike in concern regarding bacteria, cysts, and viruses related to the COVID-19 pandemic. 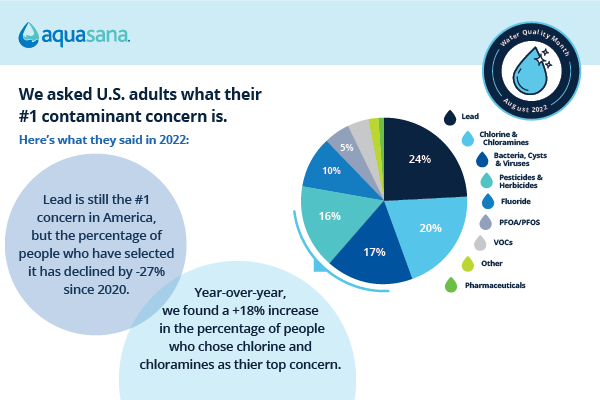 When respondents were asked why they chose lead as their top concern, the most common answer (27%) was because it was the contaminant they heard about most often in the news.

Looking at data that shows what people are searching for on Google, we see that in 2016 there’s a spike in people searching for “lead in drinking water.” This correlates with news coverage of the water crisis in Flint, Michigan.

Since that time, interest has slowly declined with a brief bump in February and March of this year related to new legislation around lead contamination. Specifically, in February the EPA announced the WIIN grant that provides $20 million to assist disadvantaged communities and schools with removing lead from drinking water. In March, President Joe Biden spoke about the importance of replacing lead pipes in relation to a new infrastructure bill during his State of the Union address. Outside of a few random spikes, interest in lead contamination of water has been on a steady decline in recent years which correlates with the level of concern we’ve seen from our survey data.

After lead, the next most concerning water contaminant in 2022 was chlorine and chloramines with 20% of the vote. While concern for lead has gone down in recent years, the opposite is true for these contaminants. Only 14% of people selected chlorine and chloramines as their top concern in 2020, but this rose to 17% in 2021 and is now at 20% as of 2022 — an annual increase of around 20% each year. 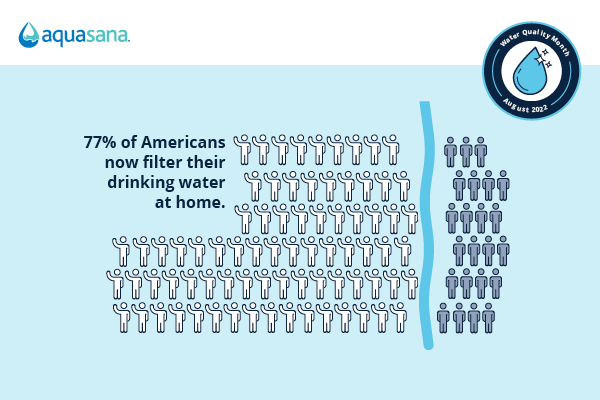 Interestingly, the top three contaminants have remained the same in the time since our survey began, although we have definitely seen changes in their percentages and order. 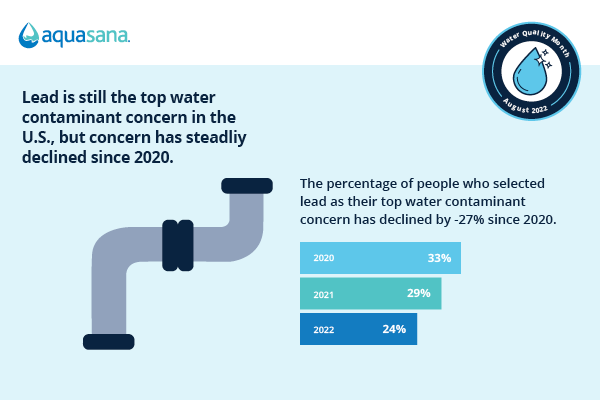 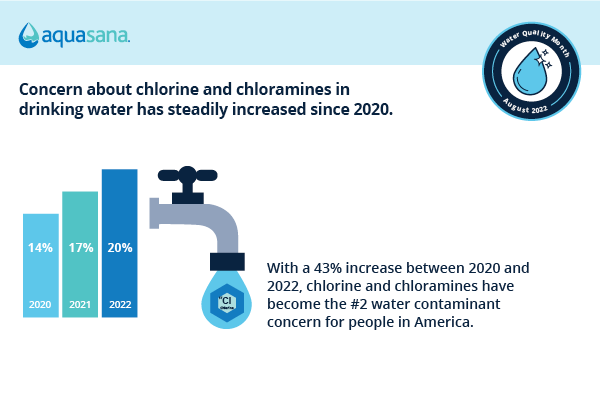 These chemicals are commonly used during the water treatment process to disinfect it, but come with dangers that Americans may be gaining awareness of. For context, here’s some information about chlorine and chloramines and the difference between them:

However, the added staying power of chloramines does come with a few downsides. The trace amount of chemicals that remain can cause irritation in your skin, hair, and eyes — an issue that’s especially prominent when showering in an enclosed space where you may inhale vaporized chloramine. Furthermore, these chemicals also pose a risk to kidney dialysis patients, fish owners, and there may still be a slight unpleasant taste or odor from the chemical’s presence.

As more and more cities switch from the use of chlorine to chloramines, concern may grow over the latter’s harmful side effects.

Rounding out the top three contaminant concerns in 2022 — bacteria, cysts, and viruses received 17% of the vote and saw a year-over-year decrease relative to our last survey. The contaminant had a 19% vote share in 2020, then jumped to 24% in 2021 in correlation with the COVID-19 pandemic, but dipped down to 17% this year. Despite the decrease, the pandemic remains top of mind for Americans who selected this as their top concern — as 40% of people who chose it said “the COVID-19 pandemic made me more concerned about bacteria, cysts, and viruses being in my water.”

2021 vs. 2022: Changes in Why People are Filtering Their Drinking Water

We know that water filtration is becoming more popular over time, but what reasons are driving these changes? To understand this trend, we asked people who currently filter their water about their reason for doing so. Take a look at the results below, and read more detailed findings on the top three answers in the following sections. 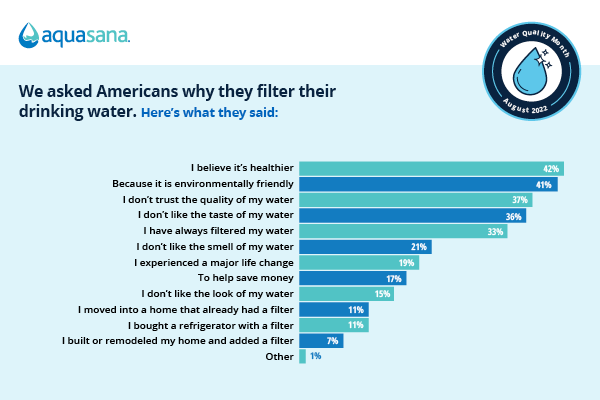 As people prioritized their health during the pandemic, we’ve seen significant habit and lifestyle changes. Beyond wearing masks and social distancing, it appears that people also started to look for ways to improve the safety of their tap water – and water filters are a clear and effective solution.

Regarding health, proper hydration is essential for keeping your body in good condition. However, not all water is equally as beneficial. Drinking contaminated water puts your health at risk, so one could argue that using clean, filtered water is just as important as the act of hydration itself. 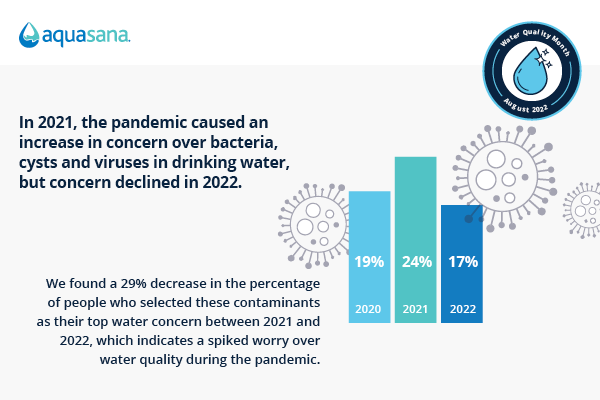 1. Health: In a post-COVID-19 world, health is more important to Americans than before and it’s impacting water filtration habits

The link between health and water is intrinsic, so it’s no surprise this is the top reason people filter their water, but we’ve also found that in a post-COVID-19 world health is top of mind more than ever. 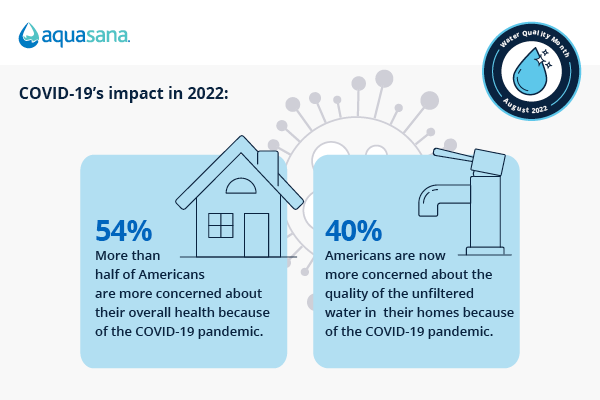 2. Environment: The environment is top of mind for people who filter their water

At 41%, the environment was the second most commonly selected reason why people filter their drinking water and it was very close behind health.

As a result of growing concern for the environment, consumer habits have also changed in favor of eco-friendly products. According to 2021 survey data from The Economist, 72% of respondents reported they are actively buying more environmentally friendly products than they did five years ago and 81% noted they expect to buy even more over the next five years. Similarly, our survey found that in 2022, 45% of people say they “always” seek out products to purchase because they are sustainable for the environment, which is up from 27% in 2021.

This change is referred to as the “Eco-wakening”, and its effects are far-reaching with no signs of slowing down.

As consumers look for ways to help the environment in their purchasing decisions, switching from bottled water to a filter is a clear and obvious choice. Beyond the environmental benefits, it’s also cost-effective, as drinking the recommended 8 glasses of water per day would cost $1,400 per year from bottles. 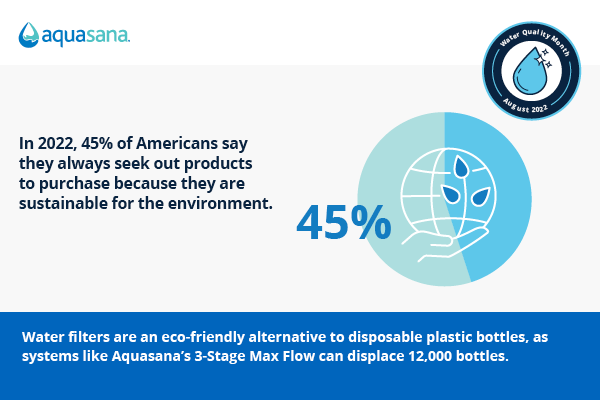 At 37%, lack of trust in the quality of drinking water is the third highest motivation for people who filter. Even if consumers rely on public tap water that’s frequently tested and treated by the city, consumers may not be satisfied with environmental standards on the level of contaminants that are allowed to be in water. Even after water has been treated — there’s still a risk for recontamination as it travels from the treatment facility through water lines to homes.

Of the population who doesn’t filter their water, trust was also the most common reason people noted they would start. We asked people who don’t filter their drinking water what situations would motivate them to start, and “if I couldn’t trust the quality of my water” was selected 65% of the time.

These findings suggest that people are learning more about their water quality, but this may be leading to less trust in it.

In fact, this year 69% of people agree it’s necessary to filter their tap water at home, which is up from 63% in 2020. On the same note, more than half (53%) of people selected a filtered water source as the most trustworthy option for clean drinking water in 2022.

This accounts for the combined results of several types of filters (whole house, under sink, etc.), although the highest standalone answer was bottled water with 31% of the vote. But as should be expected, trust in bottled water has gone down over time, from 41% of people rating it as the most trustworthy source in 2020 to 39% in 2021 and a staggering drop to 31% this year. 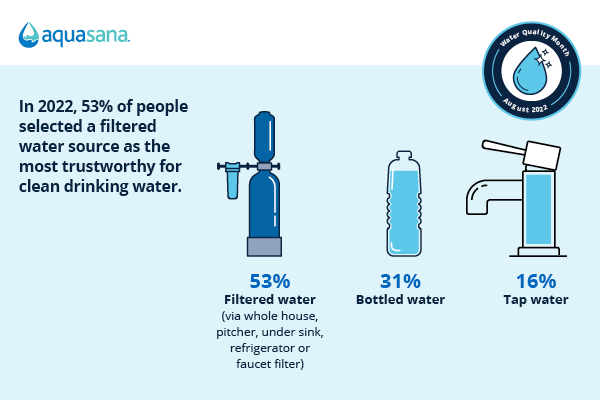 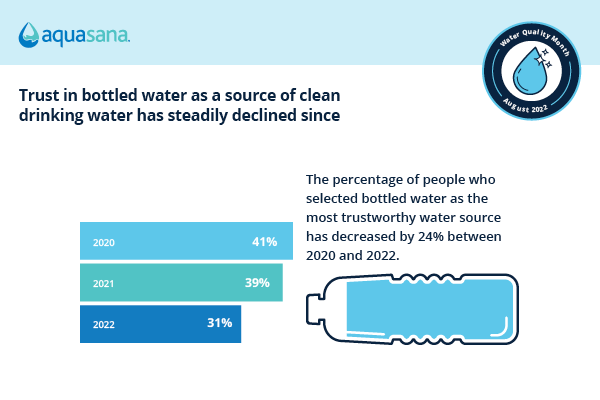 Beyond the environmental negatives mentioned earlier, bottled water may actually be less safe than even non-filtered tap water because bottle manufacturers don’t have as stringent regulations as local municipalities. Bottled water manufacturers are not required to disclose where the water came from, how it was treated, and what contaminants it contains. As consumers become more knowledgeable about water quality, they appear to be recognizing that bottled water isn’t as safe as it’s sometimes talked about.

Key Takeaways From Our Survey Results

More and more Americans are choosing to filter their tap water at home. The primary contaminant concerns have remained the same in recent years, though we’ve seen heightened concern about chlorine and chloramines. When looking at motivations for filtering water, we found the driving factors are health, concern for the environment, and a lack of trust in their water quality fueled by growing knowledge of the subject.

Moving forward, data suggests we will continue to see a steady increase in the popularity of water filters and decreased trust in disposable bottles.

Regions (based on U.S. Census map)

Each August we observe National Water Quality Month with a goal to spread awareness about water quality issues and make changes to help preserve water resources.

From Boomers to Gen Z, the results are in, and they’re not what you think.

Parents Remain Ahead of the Curve in 2021, According to the 3rd Annual Aquasana Water Quality Survey

See our survey insights about parents' knowledge and concerns regarding water quality.