The Austin Floods: How to Deal During a Boil-Water Advisory

A city-wide boil-water advisory is no laughing matter. Here's what you need to know.

Murky water and even murkier information are pouring to and from the water treatment plants as the residents within Austin city limits have been forced to adjust to record-breaking rainfall. As the city scrambles to figure out backup plans, residents have been forced to live under a Water Boil since the morning of Monday, October 22nd, on top of a desperate plea from authorities to decrease water consumption by up to 20 percent as of the afternoon of Tuesday, October 23rd. Our very own company is based in Austin, so the residents are not alone in dealing with the crisis brewing in our own backyard. With more rains on the horizon, we ask: how did this happen, how can residents deal, and how can we prevent this in the future?

How the Rains Flooded the System

September 2018 was the wettest month on record in all of Texas history, leading to devastating flooding in the Central Texas area. How did it happen? Starting upstream from Austin city limits is Lake LBJ — tucked inside a basin that received 11.2 inches of rainfall in a manner of two weeks. As recorded by the Lower Colorado River Authority (LRCA), Lake Travis itself has a flood stage of 14 feet and is currently at 13 feet as of writing this on Wednesday afternoon. Lake Travis elevated to such heights that authorities had to lower the eight gates at Mansfield dam, sending floodwaters surging into Lake Austin.

Lake Travis elevated to such heights that authorities had to lower the eight gates at Mansfield dam, sending floodwaters surging into Lake Austin.

But why does that matter? Customers of Austin Water get their drinking water from the Colorado River as it flows directly into Lake Austin. The decision to lower the gates at Mansfield Dam therein led to excess silt and sediments flooding the Austin Water systems to such a degree that the company could not keep up and meet the demands of an entire city. So, a boil-water advisory was enacted Monday morning to buy Austin Water some time. But the boil-water advisory alone was not enough.

According to a post on the Austin Water Facebook page, as of Tuesday afternoon, “current customer use is about 120 million gallons per day. Water reservoir levels are reaching minimal levels. Immediate action is needed to avoid running out of water. All residents are asked to reduce your personal consumption by 15 – 20 percent. ”

So, residents slowed their usage and started boiling. And while excess silt and sediment remain the primary cause for the boil-advisory, the main health concern for Austin residents is the potential of microorganisms and the viruses they carry along with them.

Just for a quick refresher, the term “microorganism” or “microbe” refers to any living organism in our water, including bacteria, viruses, parasites and cysts (e.g., legionella, giardia, and E. coli). Ingesting these can cause problems ranging from gastrointestinal illness (diarrhea, vomiting, stomach cramps) to pneumonia. Even if the water hasn’t tested positive yet, it’s important to take every precaution.

How Residents Can Deal (for Now)

While many schools and hospitals have had to take half days off or close completely, and restaurants have either closed or temporarily shut down to re-strategize, the Austin Water authorities have been helpful in giving businesses and families across the city the tools they need to manage.

Here are a few recommendations we have up our sleeves, as well. For starters, understand that common pitcher filters, in-line refrigerator filters and most other filtration systems (e.g., faucet-mount, under-counter, etc.) are not effective at eliminating bacteria and viruses.

The only in-home water filters effective at removing microorganisms are filtration systems equipped with an ultraviolet (UV) light or systems with a Microbial filter. Like all technologies, however, not all filters and UV lights are created equal, so we recommend choosing a system that:

Austin Water authorities are recommending that for those who do not have access to NSF-certified water filtration systems, you must bring your water to a full rolling boil for three minutes, then let cool for drinking purposes. 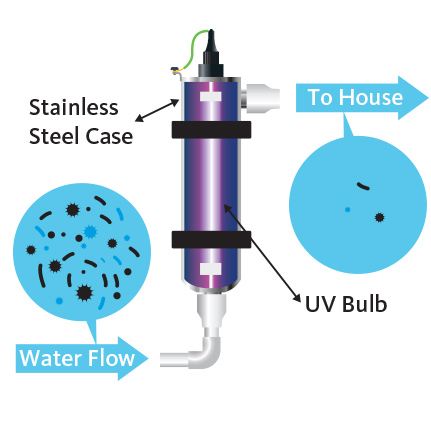 Let’s go ahead and get this out of the way: there is no tried-and-true method to prevent a boil-water advisory enacted at the municipal level. In fact, scientists are predicting that the effects of climate change will only continue to worsen flooding situations to the point that we will likely experience more boil-water advisories soon.

In a report from the Austin American-Statesman, “The chances that a 15-inch rainfall might hit Central Texas in any given year had long been about 1 in 1,000. But with the warming of air that scientists expect over the century, some predict those chances might jump to 1 in 50.”

But you can help yourself. As mentioned above, installing a whole house system with a Sterilight UV filter can help protect your entire house from experiencing the full impact of sediment and silt deposits that the city might not be able to protect you from during a boil-water advisory.

You can also contact your local lawmakers to help encourage better infrastructure design across your municipality, better access to flood insurance, a redefinition of property value for homes in low-lying areas, and more.

Investing in a proper whole house water filter can act as a bulwark during boil-water advisories, but you can also invest in your community. Because at the end of the day, change starts at the home.

Get your raw water here!