The Ultimate Guide to Sports Drinks

In the last 50 years, sports drinks have become ubiquitous.

Great for marathon runners, hangovers, and those staying home with the stomach flu, sports drinks are ubiquitous. You’d be hard-pressed to find any store that sells water without also selling Gatorade, Powerade, or the like.

In the last 50 years, companies that manufacture sports drinks have done an excellent job associating sports drinks with three terms: hydration, electrolytes, and health. Consequently, the average person drinks a sports drink because they believe they’ll benefit from enhanced hydration and athletic performance.

While that is largely accurate, isotonic water is a lesser-known, but a significantly more precise descriptor of Gatorade, Powerade, and other similar beverages. Isotonic water, in fact, is at the core of these popular sports drinks. For a more nuanced explanation of why sports drinks are popular and how they actually benefit the consumer, it’s important to understand the origins of isotonic water-based sports drinks.

What Does “Isotonic Water” Mean?

Isotonic sports drinks effectively replace fluids lost through sweating while also providing a surge of carbohydrates for energy. The combination of rehydration and energy is designed to provide an athlete with the right mix of nutrients to stay invigorated throughout a workout.

An Abridged History of the Isotonic Sports Drink 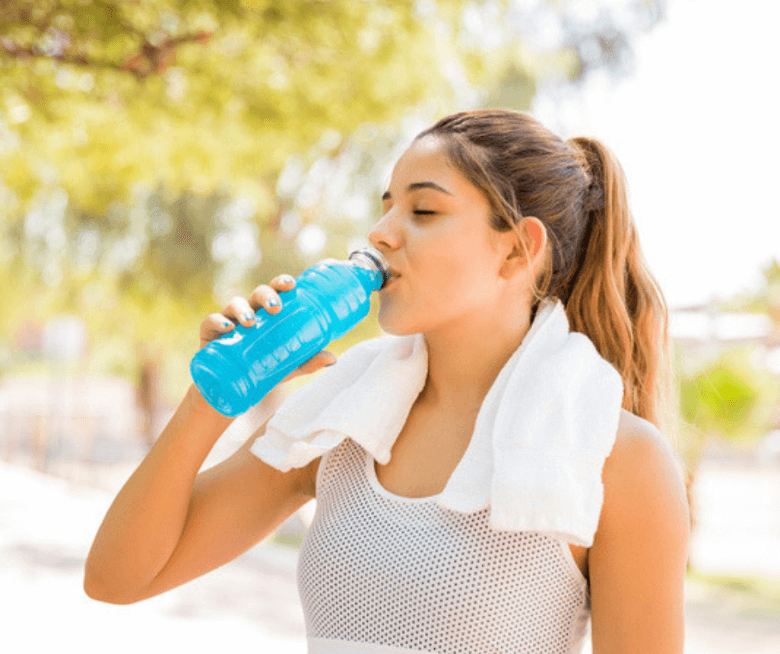 As early as the 1970s, athletes, specifically long-distance runners, were discouraged from hydrating during exercise. The belief at the time was that water would weigh the runners down. Around the same time, about 1,000 miles south of New York, scientists at the University of Florida were working on developing a drink for the Florida Gators football team.

The Gators coach had noticed that players were losing steam in the second half of the game. In an effort to combat this, the coach had players drink an isotonic beverage — named Gatorade— throughout the games. That same year, while testing Gatorade, the Gators won their first Orange Bowl against Georgia Tech. The Gator victory combined with a lucrative partnership with the NFL and the licensing agreement created a launchpad for Gatorade, and thereby, isotonic water.

Although other groups were working on similar hydration tests at the time, and even earlier, Gatorade is widely credited with bringing the sports drink craze to the mainstream.

It’s Not a Success Without Controversy

The report, published in the British Medical Journal, argues that the beverage industry has convinced consumers of a number of myths or half-truths that, in turn, led to the growth of isotonic sports drink sales. For example, the myth that the body does not have a good way to recognize thirst or that water is not an effective form of rehydration during and after exercise was countered by pointing to studies that have proven the body does, in fact, have a reliable indicator for thirst and water, and that water is necessary.

Studies from the Gatorade Sports Science Institute and other independent research organizations have shown that isotonic water-based sports drinks are more effective for rehydrating than water. And that is true, but only conditionally. The whole truth is that whether water or isotonic water is better for a certain workout depends entirely on the length of a workout and the amount someone sweats.

You may remember that isotonic water contains similar concentrations of salt and sugar to the human body. This is so that during a strenuous workout, as someone’s electrolyte, carbohydrate, and water levels deplete, they can replenish their system with a drink that works as a precise replacement.

This boost, though, only makes sense for people exercising for longer than an hour or losing a significant amount of sweat. If someone exercises for less than an hour or the exercises are not particularly strenuous, drinking isotonic water may be counter-productive and has been linked to weight gain and even obesity. These findings do not indicate that sports drinks containing isotonic water are inherently unhealthy, but that depending on the activity and level of exertion, water is an optimal form of rehydration.

If someone exercises for less than an hour or the exercises are not particularly strenuous, drinking isotonic water may be counter-productive and has been linked to weight gain and even obesity.

But regardless, whether you’re at mile 5 or just kicking off your spin class, always keep a bottle of water on hand to stay hydrated while you exercise. Even if it means buying a belt or a holster to carry your water while you move. The Aquasana Stainless Steel Clean Water Bottle comes with a filter cartridge so that you can hydrate with the cleanest, healthiest water at the gym. Not only that but for every cartridge you use, you save 600 disposable plastic bottles from entering the environment.

How to Stay Hydrated While Drinking Alcohol

At the end of the night, it’s important to stay hydrated no matter what.

Staying Hydrated While Working Out

Keeping tabs on your BPM during exercise will help you stay properly hydrated.