Without awareness, there can be no change.

Every September 22, nonprofit communities around the world gather to celebrate World Rhino Day. This holiday is an annual celebration and pledge drive, started in 2010 by World Wildlife Fund South Africa, to raise awareness around the rhino’s endangered species status and help ensure funding to better increase the rhino population.

It’s on this day that the World Wildlife Fund South Africa partners with zoos, nonprofits like the International Rhino Foundation (IRF), the BBC and so much more. The goal of the annual pledge drive is to raise ~$3,000 USD. And last year, they almost reached their goal.

So how does Aquasana fit into all of this?

Our line of Rhino whole house water filters was inspired by the Rhinoceros’ strength and determination. But while our Rhino 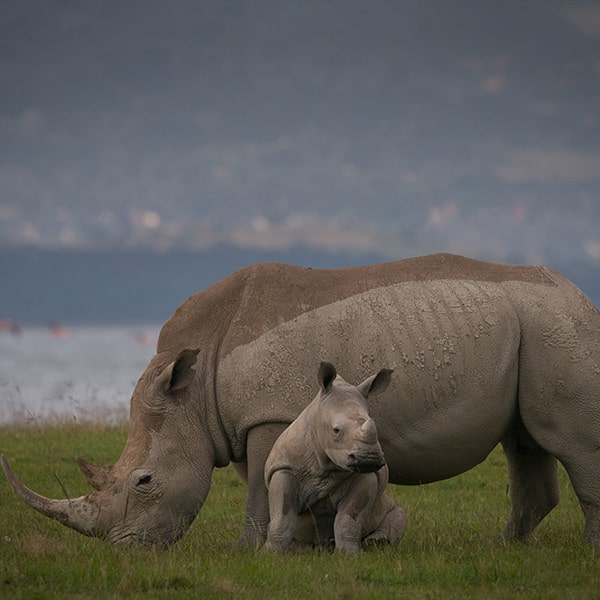 systems are built to last, the five main species of rhinoceroses are currently facing a widespread poaching crisis, nearing extinction.

For last year’s 2018 World Rhino Day, we were honored to partner with the IRF. For 25 years, the IRF has championed the survival of the world’s rhinos through conservation and research. Based in the U.S., IRF operates on-the-ground programs in all areas of the world where rhinos live in the wild. In five countries across two continents, they support viable populations of the five remaining rhino species and the communities that coexist with them.

But more than that, the work that the IRF is doing for the rhino community is invaluable. Rhinos are on the endangered list for many reasons, some of which include habitat loss, poaching, and inbreeding. But they don’t have to stay on the endangered species list — not if we can help it. So here’s a little bit about our megafauna friend.

As some of the largest remaining megafaunas, there are five species (and 11 subspecies) of rhinos in total.

WHY ARE RHINOS ENDANGERED?

Among many factors, this is the biggest and most obvious reason. Rhino horns, which are illegally traded, go for as much as $30,000 per kilogram on the black market. Folk medicine practitioners believe that the tusk of a rhino can, among other things, cure cancer. It’s because of this belief that black rhinos are hunted to the point of becoming critically endangered, while other members of the species are nearly extinct.

How often does poaching happen? Between 2007 and 2014, rhino poaching grew 9,000 percent, with an average of 3 rhinos killed every day.

As industries like logging, agriculture, manufacturing and more continue to take over wildlife habitats, rhino populations are also deeply affected. Loss of habitat not only affects the rhino’s ability to roam and feed, but it also affects the way they breed. They’re extremely shy and don’t typically breed in captivity (i.e. in zoos). In the wild, as rhino populations continue to lose the lands they once called home, they have scattered from other groups of rhinos. This has caused inbreeding within certain population segments, unfortunately leading to things like deformities and birth defects.

HOW MANY RHINOS ARE LEFT?

Javan rhinos are one of the most endangered species in the world, with only roughly 67 remaining in total. Here’s the current population breakdown for the rest:

According to Rhinos.org, black rhinos have suffered the greatest loss in numbers over the last decade due to poaching. The number of wild black rhinos dropped a shocking 96 percent between the years 1970 and 1992, from 65,000 to roughly 2,300 in the wild. In 2015 alone, 1,338 rhinos were poached across all of Africa.

To make matters worse, the 15-16 month gestation periods for female rhinos puts them at a severe disadvantage when trying to escape poachers and help their population rebound.

But not all is lost, not yet anyway. Thanks to some intensive anti-poaching efforts over the last two decades, the number of African rhinos is now above 5,000. And while that’s nowhere near their original numbers, it’s a start.

WHAT ELSE CAN YOU DO TO HELP PROTECT ENDANGERED RHINOS?

At Aquasana, we believe clean water is the most important component of healthy living. While our Whole House Rhino saves you from water contaminants, you can help save the real rhinos and their environment by donating to the cause of your choice on World Rhino Day.

Here are a few non-profit organizations that support the awareness and protection of this endangered species, click below to learn more:

For ways to donate to the IRF, check the World Rhino Day Facebook page, or check the hashtag #KeepTheFiveAlive. You can also learn more about IRF by visiting rhinos.org.

Understanding NSF and IAPMO Certifications and what they mean for your drinking water.