Ultimately, the EPA can only do so much to help you manage your allergens and asthma triggers.

Nearly one in 12 Americans suffer from asthma across the U.S., according to the Centers for Disease Control and Prevention (CDC); that’s about 25 million people annually, with numbers increasing every year. Those who suffer from asthma typically have a clear understanding of which environmental factors — or ‘triggers’ —can cause an asthma attack.

But what happens when an asthma attack is triggered? Here’s a quick preview: respiratory symptoms such as difficulty breathing, chest pain, coughing, and wheezing begin. Depending on the severity of the trigger, these symptoms will feel like a minor interruption or, at worst, a life-threatening attack.

Fortunately, knowledge is power, and with a greater understanding of which triggers aggravate your symptoms, you can learn to better avoid them.

For example, the usual suspects are:

Triggers that fly a little more under the radar—like stress, food additives, aspirin, and alcohol—also made the list. But one of the strangest triggers is right where you’d least expect it: in your water.

One of the strangest triggers is right where you’d least expect it: in your water.

The Culprit in Your Water

Certain chemicals have proven to be game changers for water treatment. For example, when chlorine was first introduced into the water disinfecting process, waterborne diseases (like typhoid and cholera) decreased significantly. Chloramine, a solution that is a 5:1 mixture of chlorine and ammonia, took it a step further, acting as a water treatment agent for longer periods of time to prevent bacterial growth as water traveled from the treatment facility to your tap.

These chemicals allow the average American to have free access to clean water without risk of contracting a waterborne illness. And while the steep drop in waterborne diseases is, of course, a positive outcome of disinfected water, the link between water treatment chemicals and asthma flare-ups has grown.

A number of studies have confirmed that in larger quantities, the amount of chlorine needed to keep a pool clean is directly tied to asthma aggravation. In fact, a group of researchers found that swimmers who swam in a chlorinated pool for a little under 10 minutes were three times more likely to develop exercise-induced asthma than if they exercised on land or in water with scarce amounts of chlorine.

Now, chlorine levels in pools are much higher than they are in drinking water, but even in smaller doses, chlorine has the potential to cause respiratory aggravation. This is especially true during showers when chloroform, a byproduct of chlorination, enters the air through steam. One such study found that a 10 to 15-minute shower led to noticeable exposure to chloroform. And as one might expect, chloroform, which is a sweet-smelling odor that can knock someone out and send them to dreamland, also causes respiratory aggravation.

Other chemicals in drinking water, including fluoride and dichlorophenol, have also been shown to aggravate asthma. In both cases, subjects reported asthmatic symptoms after coming into contact with the chemicals.

Other chemicals in drinking water, including fluoride and dichlorophenol, have also been shown to aggravate asthma.

Managing asthma symptoms, depending on the severity of the condition, can be a challenging task in and of itself. 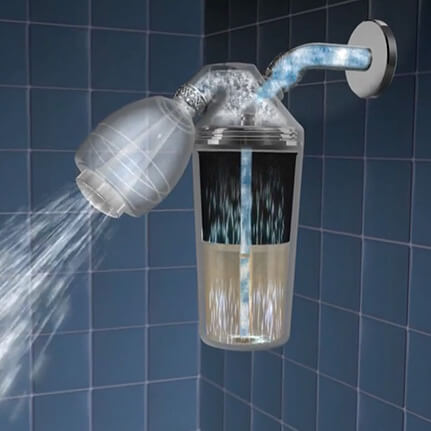 But not to fear! Anyone who is worried about potential asthma triggers, especially in their tap water, still have many methods to remove unnecessary contaminants before it goes from tap to glass or shower.

The most obvious choice is going directly to the source – a whole house filter will purify an entire home’s water supply at the outset so that every water outlet, from the shower to the washer will produce clean, chemical-free water. A proper whole house filter can remove more than 97 percent of chlorine, as well as other worrisome chemical compounds. Look for a whole house filter that’s been tested and certified by NSF/ANSI 53 and 58. NSF International is an independent, nonprofit that tests and certifies products to minimize adverse health effects and protect the environment, and its seal of approval ensures that the whole house filter you’re looking at buying is the real deal.

Alternatively, spot treatment is also possible in the form of a shower filtration system. This is particularly helpful for anyone who is specifically concerned about fumes released in the shower, as many shower filters on the market can remove up to 90 percent of chlorine and contaminants, giving you a truly clean showering experience. These filters, which can be screwed into an existing showerhead, also remove potentially asthma-triggering chemicals while improving your overall shower experience.

Ultimately, the EPA can only do so much to help you manage your allergens and asthma triggers. The choice is truly up to you when it comes to your own health. All that you must ask yourself is, “how much is it really worth”?

Our guide to filtration types helps you make an educated decision about which water filter makes the most sense for your home.