Tsunamis may not hit close to home for everyone - affects are carried far beyond origination...

Tsunamis — gargantuan waves that crash ashore after an earthquake — sound too perplexing to be a fairy tale. They are more like a troll or goblin tale, in that they represent doom not to be wished on the worst of enemies. They are devastating. About 95% of the world has never seen one. Yet when they do happen — and oh, do they happen — they can bring about not only widespread devastation and water contamination locally, but they can also affect the water half a world away.

Tsunamis bring floods on steroids: turn the dial up to 11 and then multiply it by a hundred. In December 2004, a major tsunami in the Indian Ocean was caused by an earthquake off the coast of Indonesia that registered 9.0 on the Richter scale. The resulting tsunami ravaged the coasts of Indonesia, Sri Lanka, India, and Thailand, and it even reached Africa’s eastern coast. It was “estimated to have released the energy of 23,000 Hiroshima-type atomic bombs, according to the U.S. Geologic Service.” It also killed over 230,000 people.

A Story About Tsunamis

Tsunamis are predominantly caused by underwater earthquakes, though landslides and volcanic eruptions have also set them off. The word “tsunami” itself comes from Japanese, in part because they are much more common in Japan. But the entirety of the Pacific Ocean’s “Ring of Fire” gets tsunamis, and thus 26 nations are members of the Pacific Tsunami Warning System, which monitors seismic activity and issues warnings to coastal communities. But tsunamis aren’t limited to the Pacific. They’ve also been recorded in the Caribbean and the Northern Atlantic Ocean.

Due to the relative rarity of tsunamis, many locales are largely unprepared for them and tend to treat their disaster response more like a flood, which is like bringing a knife to a gunfight. When that much water slams into a shoreline, it doesn’t just destroy homes and infrastructures in its path. It also ravages water treatment and clean water for people, which in turn hinders recovery efforts, particularly in the immediate days following the tsunami when clean water is most needed.

The Tale of the Brackish Water and the Contaminated Aquifer

One particular water concern during a tsunami is the resultant mixing of freshwater supplies with saline water. The combo is called “brackish” water, and it causes real risks to humans — namely, it dehydrates those who drink it. In the case of the Indian Ocean tsunami, seawater inundated community wells and porous rock allowed it to breach freshwater aquifers, making it more difficult to get good drinking water to those affected by the disaster, particularly in a region where most of the affected people were dependent on well water.

Sadly, dehydration isn’t the only concern when this much sea water comes ashore. Due to the massive amounts of ocean water, wells can also become contaminated not only with pollution, but also with microorganisms that lead to waterborne illnesses. Then there are the concerns that go along with water invading every crevice of an area and the effect that mixing together of water types can have. 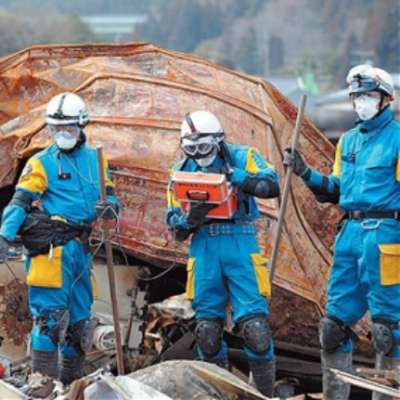 Unfortunately, the water concerns post-tsunami don’t end with waterborne illness and can also take some rather unexpected twists. If you recall the 2011 tsunami that hit Fukushima, Japan after a 9.1 magnitude earthquake off the coast of Tokyo, you may also recall the real alarm set off when water caused the electricity at Fukushima Daiichi nuclear power plant to fail. The invading seawater disabled the plant’s backup generators as well, and thus the plant’s cooling capabilities. That electricity loss, in turn, caused a nuclear meltdown.

In fact, six days after the earthquake and tsunami, traces of iodine-131 — which is radioactive, unlike the iodine that’s added to table salt — were found in Tokyo’s drinking water. It might be easy to think, “Welp, I don’t live there, so I’m not worried about it.” But! As they say, “no man is an island,” and in this case far more than islands were affected — because traces of radiation from Fukushima were found in Richland, Washington, which sits a five-hour drive from the Pacific Coast. What’s scarier is they were found within a month of the Fukushima disaster. You know what they say: bad isotopes travel fast. Granted, the levels of the radiation were incredibly low and far less than the amount of radiation a single person is exposed to over the course of a totally normal day, but what’s shocking here is the speed with which the iodine 131 traversed such a distance. Years later, trace amounts of radioactive isotopes were found in the seawater and radioactive chemicals that had leaked from the Fukushima plant were found off the coasts of California and Canada.

On top of the radiation fallout, Japan still faced many of the regular water concerns post-tsunami, a main one being the amount of water pollution that’s created from everyday items getting washed away. As the seawater receded, five million tons of debris were carried out to the ocean and have since been found all over the Pacific — including an entire derelict ship from Hokkaido, Japan that turned up in the Gulf of Alaska.

Onshore, Japanese water treatment plants and piping systems were destroyed by the tsunami at Fukushima, and the loss of electricity at other plants prevented pumps from getting clean water to survivors. Afterward, Japanese officials estimated that 1.6 million households in 11 Japanese prefectures were without potable water.

While there isn’t much that can stop huge earthquakes that set off tsunamis, there are things folks living in tsunami zones can do to prepare in the event of one. If you live on a coast, make sure your community has a tsunami disaster plan in place — particularly if you live on the west coast of the United States or North America. If it doesn’t have an adequate one, contact your elected representatives to push for a comprehensive disaster preparedness plan that addresses tsunami concerns in particular. Have a water plan for your own family and possibly a filtering system in case local treatment plants are inundated or rendered powerless. A filtering system is also helpful if you use well water and it gets contaminated by floodwaters or from brackish water entering the water table. In the event that a tsunami happens, pay attention to local boil warnings and boil any water before using it unless it’s bottled water distributed by relief workers. If you have a filtering system, also use a UV light to disinfect your water from pathogens, and listen to local bulletins for warnings about brackish water.