Human activity has multiplied erosion’s speed. What can you do to help?

If there were an animation-style hall of villains that represented the global water crisis, people might be surprised to see the earth’s old pal, Erosion, there. In large amounts it has tremendous impacts on freshwater sources.

Erosion is a good guy gone bad. Until recently, weathering from erosion was just a part of the earth’s natural process. It broke up rock and shifted sediment formations, and carried those bits of sediment away.

A certain amount of erosion is necessary. But man-made activities are speeding up and magnifying the eroding process, carrying larger amounts of sediment and chemicals into the water supply at a rate much faster than the environment’s ability to adjust.

Which is the backstory of any villain: they start out kind and innocent until some corruptive force pushes them in an unhealthy direction, causing them to go out of control. Think Anakin Skywalker or Maleficent. And in the case of erosion, its ripple effects have consequences for the global water supply and human drinking water. (Which surely is all part of its evil plan! Were it to have a plan, if, like, it was alive and had actual nefarious ambitions.)

Unfortunately, the causes turning the good guy of erosion bad are plentiful. The actions that lead to soil erosion read like a greatest hits of relatively everyday activities and events for the modern world. Strong downpours, winds, and flooding are big players in erosion, which isn’t at all surprising, but so are wildfires because they destroy both the tree canopy and the forest floor. Without the foliage cover, there’s nothing to protect the forest’s soil from heavy violent rainfall. Meanwhile, the nutrient-dense topsoil in forests is held in place by the plants and trees rooted there. Remove them and the sediment breaks loose, and — depending on the amount of rain and the degree of the soil’s slope — quite literally slides into streams and tributaries and not in a fun, summertime kind of way. 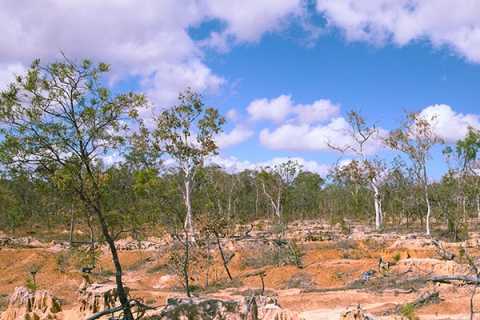 Human activity has multiplied erosion’s speed. Not only does climate change bring with it stronger storm systems, droughts, and wildfire-whipping winds, creating excellent erosion conditions, but everyday activities create erosion, too. Agricultural production increases erosion, often from the overgrazing of livestock, again removing vegetation that keeps soils in place. And tilling fields breaks up soil and loosens soil, allowing it to flow into waterways during heavy downpours.

Deforestation and urbanization are even bigger culprits. Much like a forest fire, deforestation and widespread clear cutting of forests removes vegetation and tree roots that hold soil in place. As the soil erodes and is pushed into water systems, the remaining soil layer can’t retain moisture and can become dried out, making it more difficult for new plants to even take root. And if that weren’t enough, that dried out earth can become what’s called “hydrophobic,” which is a fancy way of saying it repels water, which sounds like a pretty cool superpower for a villain. Meanwhile, urbanization speeds erosion through the same process and adds paved environment that keeps water from penetrating the ground, making the amount of runoff greater and faster, and thus, stronger.

All these events and more push sediments, minerals, and heavy metals into waterways, raising what’s called the “turbidity” of the water. Basically, that means it’s murky or cloudy.

The higher the turbidity of a water source, the more likely it is to be polluted with any number of pathogens.

How’s that happen? For starters, excess sediment in water blocks out the very sunrays that naturally disinfect and improve water quality. Sediment also provides a more welcoming environment to those heavy metals in runoff as well as (cue the spooky music) bacteria. And according to the U.S. Geological Water Science School, turbidity can provide food and shelter for regrowth of pathogens, which in turn can lead to everyone’s favorite Victorian-era trend — and, sorry steampunks, but I’m not talkin’ ‘bout aviator goggles — waterborne illness. In fact, turbidity has helped cause outbreaks of gastroenteritis in the United States and around the world. The USGS points out that in several studies, removing turbidity from water also lowered the number of protozoa in that same water. 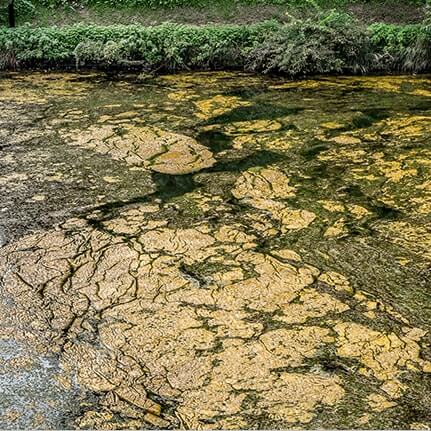 This excess of sediment, nutrients, and minerals lethally affects aquatic life.While plants and fish need a certain amount of nitrogen in the water to survive, too much nitrogen causes algal blooms to grow in a process that’s described with the oh-so-fancy word “Eutrophication.” No, that’s not the process of European-izing waterways. (If only! Just imagine how cute little frogs in berets would be!) Eutrophication is what happens when algal blooms grow out of control, sucking up most of a waterway’s oxygen and suffocating other organisms. To top it off, algal blooms can clog drains and other water run off, which can cause flooding that — guess what?! — can lead to more erosion. Instead of the Circle of Life, it’s the Circle of Water Pollution, which I suspect is how The Lion King would end if Scar had won out.

Sorry to say, but, it does indeed get worse. Algal blooms can also produce foul-smelling toxins called toxic cyanobacteria, which sounds like a name for Disney’s next villain. I can already hear the trailer in a dramatic voice: “This Christmas, The Agents of Pollution — evil toxic cyanobacteria — degrade sea life and damage Moana’s drinking water.” And while it’s not as dire as all that quite yet, those little cyano-villains can also change the taste of your water.

Your Epic Battle Against Erosion

Much like the once-good bad guys and girls of kids’ movies, erosion is just crying out for some TLC (yes, tender loving care! Not the 90s R&B sensation. RIP, Left Eye.) It’s hard for one person to feel like they can take loving action against erosion when the problems are on such a large scale, but there are some small scale earth-loving activities folks can implement to mitigate erosion closer to home. For starters, plant some trees. Not only are they great for air quality, their roots are also terrific soldiers in the battle against eroding soil. Not to mention, the shade they bring is lovely and pushes down those summer AC bills! Filter your household water and disinfect it with a UV light, particularly if you draw water from a well, which has a greater likelihood of having high turbidity. Filtering will remove much of the sediment and heavy metals while a UV light will do the ol’ sun’s work of killing pathogens.

Lastly, support legislation that regulates urban growth. Look for policies that push for greater density and less sprawl. And while you’re at, consider taking (and supporting!) public transportation when you can. The less everyone contributes to global warming on a larger scale, the more likely our soil will stay where it’s supposed to be and erosion can return to its original way of being one of the good guys.