See insights from our survey about parents' knowledge, concerns, and actions related to water quality.

As kids across the country head back to school for fall, we’re sharing more data from our fourth annual Water Quality Survey that shows parents as an involved, knowledgeable group that has become increasingly concerned about water quality over time.

Following the COVID-19 pandemic, we found that parents are more worried about the overall health of their families — including their access to clean, healthy water. In correlation with increased concern, parents are also willing to take action to understand what’s in their water and how to improve it.

For context, our survey data was collected in March 2022 from a poll of 2,246 U.S. adults, and we’ve compared results from previous years to identify changing views and behaviors within the population. This post focuses on findings specific to parents’ concerns and knowledge about water quality, but for additional insights, you can check out our initial survey report, which reveals broader trends within the general population.

Read on to see how parents’ concern over water quality has changed over time, which contaminants concern them the most, and what they’re doing about it.

Parents in the U.S. are becoming increasingly concerned about water quality over time

Parents have always been ahead of the curve when it comes to knowledge and concern over water quality, as we’ve seen the same trend from our past three years of survey data.

In 2022, we found that parents are 62% more likely than non-parents to say they are concerned about the quality of the unfiltered tap water in their homes. Not only are parents more concerned than non-parents in the current year, but this figure is up 34% from 2021, indicating concern has grown over time. As kids across the country head back to school for fall, 70% of parents said they’re also concerned about the drinking water quality at their child’s school — up 21% from last year.

Additionally, parents were 30% more likely than non-parents to say the pandemic made them more concerned about their overall health. During the pandemic, we saw people change habits including more frequent hand washing, social distancing, and wearing masks among other lifestyle changes. Even in subsequent years since the emergence of COVID-19, we’ve seen many of these worries and habits continue, including concern for water quality. It will be interesting to see how pandemic-related concern over water quality changes in the future, but for now it remains prominent. 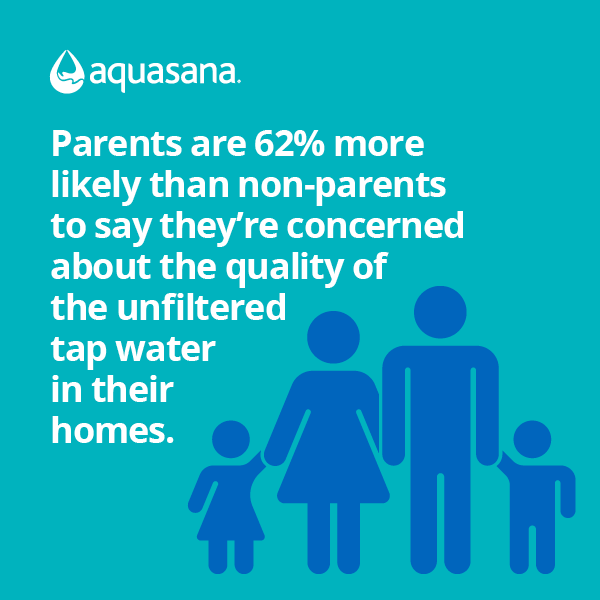 In response, parents are more likely to filter their water, and it’s growing steadily year over year 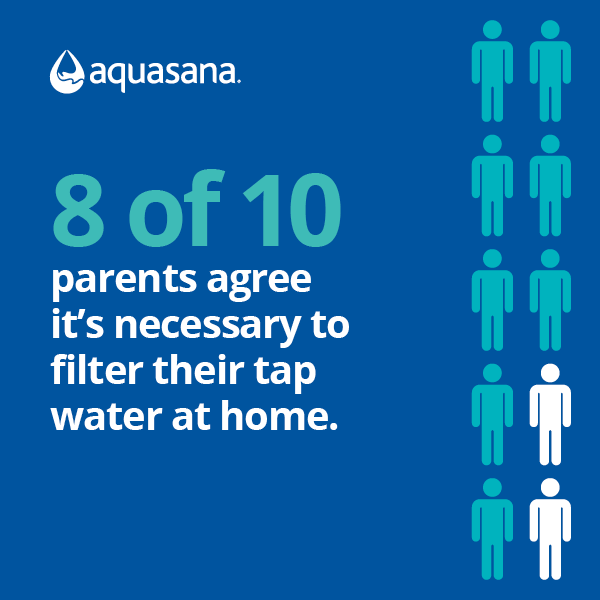 In correlation with the increased concern over water quality among parents, they’re also significantly more likely than non-parents to filter their tap water at home.

Our survey revealed that 8 of 10 parents (81%) agree that it’s necessary to filter their tap water at home, a figure that’s up 16% from last year and 45% higher than the percentage of non-parents who have this sentiment. However, it’s one thing to think water filters are necessary and another thing to actually use them.

Putting words to action, 88% of parents filter their drinking water at home in 2022 — which is 35% higher than the percentage of non-parents who use a filter. Furthermore, the usage of water filters among parents has increased over the last several years — from 78% in 2020 to 81% in 2021, and now 88% in 2022. This year’s increase marks the largest shift in the history of our survey, and we’re nearly at the point where 9 of 10 parents are using a water filter at home. Based on the trend we’ve seen, it’s possible this point may be reached in 2023.

Why do parents filter their water?

Parents’ concern and usage of water filters is correlated with an apparent higher knowledge of water quality, as parents are more likely than non-parents to say they know a lot about their water.

Specifically, 35% of parents say they know a lot about the quality of the unfiltered tap water in their home compared to only 18% of non-parents who feel the same. In line with other findings presented in this post, we also saw a year-over-year increase in the percent of parents who claim to know a lot about their home’s water quality — from 23% in 2021 to 35% this year. This indicates a growing percentage of parents are learning about water quality in their homes, which is likely contributing to the increased usage of water filters.

To better understand parents’ rationale for filtering their tap water at home, we asked parents why they use a water filter at home and came away with some interesting results. 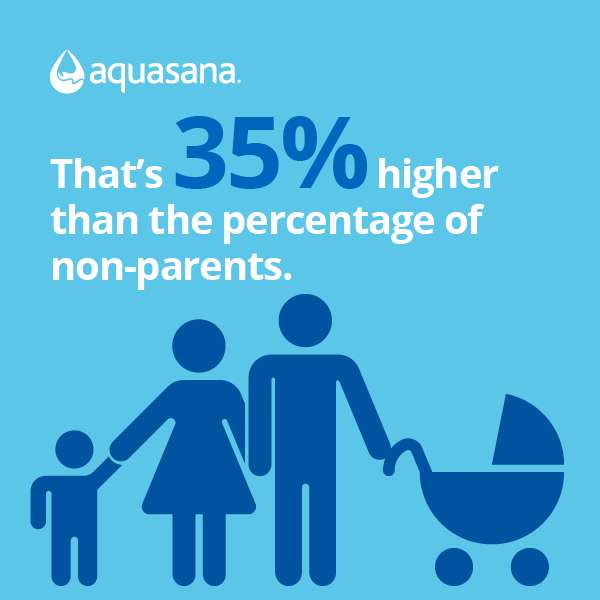 The top answer is actually unrelated to water quality — 50% of parents said they use a filter because it’s environmentally friendly. Bottled water is often seen as a trustworthy source for clean drinking water, but that trust has consistently declined over the past three years and the damage plastic bottles cause to the environment is well known. For example, 80% of plastic water bottles end up in landfills and they take 450 years to decompose. Using a water filter helps reduce dependence on plastic bottles, and in 2019 our water filtration systems displaced 1.2 billion plastic bottles of water. To be more environmentally friendly, parents are making the switch to filtering their drinking water at home. The use of water filters for this cause reflects parents' increased interest in helping the environment in general, as 54% of parents this year say they always or often seek out products that are sustainable for the environment.

In second place, the next most common reason parents said they use a filter is because it’s healthier (38% of responses). Water filters are a great way to achieve clean, healthy water at home by removing contaminants that can sometimes make it through the treatment process. In some cases, the chemicals used to treat water are contaminants themselves, such as chlorine and chloramines. A water filter is an extra line of defense to protect against these contaminants, along with others that may be picked up as water travels through pipes to your home, such as lead. Beyond the health benefits, using a filter can also help improve the taste, smell, and appearanceof your home’s tap water.

Rounding out the top three, the next most common reason for parents who said they use a filter is because they claim to have always filtered their water (36%). It appears that some parents adopted water filtration habits so long ago that they’ve forgotten their initial reason for doing so, or it has just become a standard practice for them. The claim that parents have always filtered their water further demonstrates how water quality has consistently been top of mind for this segment over the years when compared to other groups.﻿

What are the water contaminants that concern parents the most?

Regarding which contaminants concern parents the most, the top three answers received almost equal votes and accounted for a combined 59% of all responses. Chlorine/chloramines were parents’ top concern with 21% of the vote, which was just slightly ahead of lead (20%), followed by pesticides/herbicides (18%).

Outside the top three answers, parents also showed higher awareness and concern for PFOA/PFOS chemicals. In fact, parents are 88% more likely to be familiar with PFOA/PFOS than non-parents and they’re 50% more likely to select it as their top contaminant concern. These contaminants have gained prominence in recent years, to the point where the EPA recently announced new health advisories and a $1 billion infrastructure bill to help protect against them.

Regardless of which contaminants concern parents the most, we’ve seen that there are several motivations for parents utilizing water filters at home. 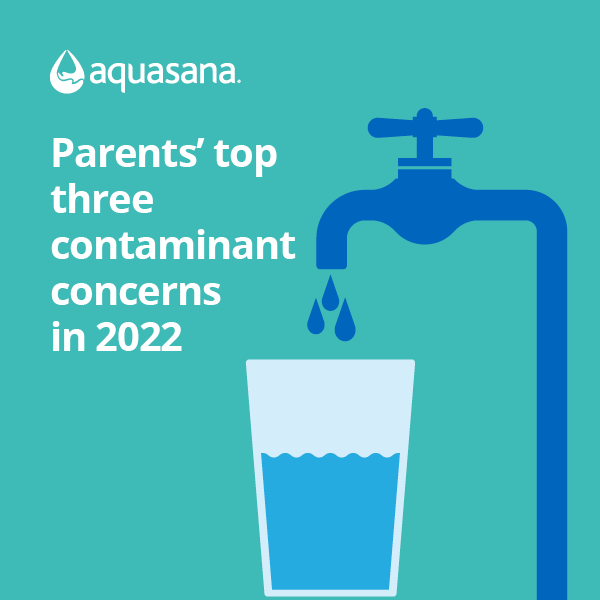 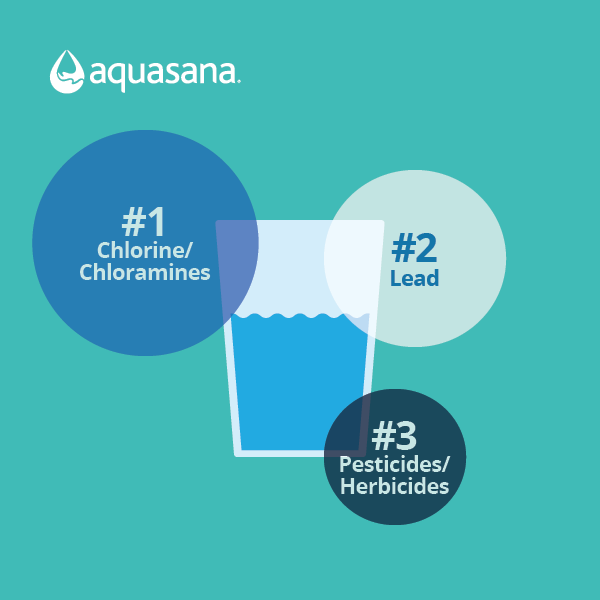 Overall, our 2022 survey revealed that parents are consistently more concerned and more willing to take action regarding water quality issues compared to non-parents. This is a growing trend with concern consistently rising over the past several years and will likely continue moving forward. We’re nearly at a point where nearly 9 of 10 parents filter their water at home, and a growing percentage are becoming concerned about the quality of water at their childrens’ schools.

However, we’ve determined that water quality isn’t the only reason for the increasing usage of filters. Many parents are using filters because they’re environmentally friendly, and for some, filtering water has always been common practice throughout their lives.

Whether you’re looking to improve the quality and safety of your tap water or want to switch from plastic bottles to help the environment, Aquasana has a wide selection of filters to choose from. All Aquasana filters have been independently tested and certified to NSF/ANSI standards to tackle the contaminants listed in this blog post. Our award-winning, eco-friendly filtration systems have also been designed with sustainability in mind to help minimize waste.

Check out our selection of filters to find your perfect solution and start enjoying healthier, better-quality water!

﻿Regions (based on U.S. Census map)

In honor of National Water Quality Month each August, we survey U.S. adults about their drinking water concerns with the ultimate goal of spreading awareness about water quality issues and to help people to find solutions they can trust.

The Recipe For Keeping Kids Hydrated

NPR reports that up to 25% of children aged 6-19 don’t drink any water as part of their fluid intake.

Importance of Clean Water for Children

Because of their smaller size and the way contaminants build-up, children are more vulnerable to the ill effects of contaminated water than adults