California: Is desalinated water the future?

How the ocean can hydrate the masses.

As the years have progressed, California’s struggle with wildfires has only increased. In fact, California’s 2019 wildfire season has been so consuming that Governor Gavin Newsom declared a state of emergency. Nearly 200,000 residents – and counting – have been relocated to other regions and 1 million residents are stuck without power.

So what causes these fires? Summer in California is typically a season of drought. So much so, that nearly every Fall when the Santa Ana winds pick up, even something as inconsequential as a semi-truck turning too fast can cause sparks to fly. And once that fuse is lit, it gets tricky containing the fire to one specific area.

This fact doesn’t always make the news, but, wildfires wreak havoc on your water supply. They create erosion issues where they destroy forest floors and make it difficult for water to penetrate the soil (hydrophobic soil); chemicals — like bioaccumulative PFAS often found in fire retardants — can easily contaminate your water supply; local fire departments that rely on local reservoirs, rivers and more as they put out the fires end up depleting the post-drought water supplies even further.

According to the Orange County Register, “California’s water problem is so extensive that only a widely scoped solution will do. In a new UC Davis study reported by CNBC, water shortages this year were estimated to cost the state’s agricultural industry a whopping $550 million, plus more than 1,800 lost jobs. With other indirect costs, researchers forecasted, the total burden rises to $600 million and some 4,700 jobs.”

What California needs is a water solution that can help in times of wildfires and drought. Here’s where desalinated water comes in.

What is desalinated water?

Let’s start with the basics. Desalinated water is water that has been stripped of all sediment, salt, and minerals. Whenever saltwater is treated for human consumption, it goes through this process so that it can become potable.

As a water source that is unaffected by drought, desalinization can act as a secondary water processing method for areas that lack rain. To put it another way — it creates water that works just like the Post Office — whether rain, sleet or shine.

The process of desalination typically involves pulling salt and minerals from brackish water or seawater — water with a salt content between 10,000 and 40,000 mg/L.

With over 70 percent of the earth’s surface covered in that very seawater, that’s a resource with a lot of potential for long-term sustainability.

With over 70 percent of the earth’s surface covered in that very seawater, desalination is a resource with a lot of potential for long-term sustainability.

The coolest part of the whole thing? The technology already exists, and you can already own it in your own home. The leading desalination method is membrane-based — Reverse 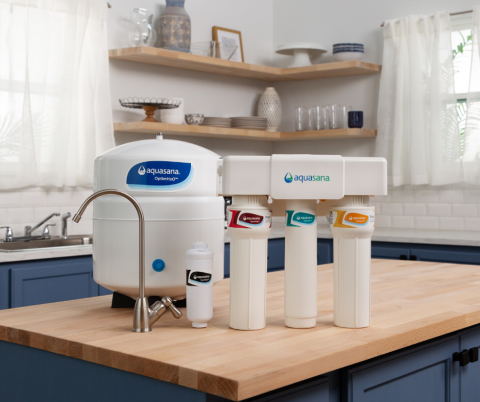 Osmosis on a massive scale.

Other methods can include thermal-based processes, like multistage flash distillation; can use the sun like solar distillation; or can rely on the reduction of atmospheric pressure, like vacuum distillation.

Regardless of which method is used, the need for technology isn’t going anywhere.

According to the International Water Association, “Desalination provides only around 1 percent of the world’s drinking water, but this percentage is growing year-on-year. An expected US$10 billion investment in the next five years would add 5.7 million cubic meters per day of new production capacity. This capacity is expected to double by 2030.”

Currently, most of the operating desalination plants provide water in the Middle East or North Africa (44%). However, as water accessibility becomes more urgent (and as the effects of climate change start to uncover new needs across the globe), scientists expect that salination capacity will grow 7 to 9 percent annually.

Where can you see this in action? Dubai. In Dubai, large-scale reverse osmosis filters convert about 416 million gallons of seawater to potable water every day. That’s because Dubai’s groundwater supplies only 0.5% of the city’s water – that means the other 99.5% has to come from Reverse Osmosis. In order to produce 416 million gallons of fresh water, the system has to pump about 2.8 billion gallons of water through it each day.

Bonus: desalination and how it can affect you

Desalination is not too hard to DIY from your own kitchen sink. And for those in California bordering on ocean water, desalination might be the best option. Whether you’re mid-drought, the power grid is out, or water resources are being saved for firefighters, desalination can still get the job done.

For example, the Aquasana OptimH2O® Reverse Osmosis + Claryum® filter removes 95 percent of fluoride and mercury, 97 percent of chlorine and arsenic, as well as 99 percent of lead and asbestos, so you can drink with confidence. Not only that, but it includes a remineralizer to add back in those healthy minerals your body craves — like calcium, potassium, and magnesium. Whether your region is hit with wildfires, earthquakes, mudslides, or more, you’ll have access to clean, great-tasting water no matter what.

And that’s just what you can do in your own backyard. According to the Mercury News, California lawmakers have just approved $34.4 million in grants towards desalination projects across the state. “As of 2013, there were roughly 24 brackish plants in California, which produced about 96,000 acre-feet of water a year. Another three were in design or under construction, with 9,000 acre-feet more, and 17 were proposed with 81,000 acre-feet capacity.”

So what can you do? Luckily, the technology already exists, and you can either own it in your own home or call your lawmakers. Leaders in California are already working on initiatives to desalinate brackish water, but some are still concerned over funding. Be your own best advocate, get involved to see how you can help your community — because everyone deserves access to clean, healthy water — rain, sleet or shine.