An Age-Old Concern the World Over

In Ancient Rome and Western Europe in particular, lead was used in everything from fishing nets, to cosmetics, to plumbing and irrigation. And throughout history, stories of long-term regional health impacts have followed closely behind its use. So much so, that some historians even think that lead poisoning played a role in the Fall of Rome. Yeesh. And while you might be thinking that’s quite the leap to make, those historians might be onto something. Here’s how lead made its way to our own backyards, how it affects your system, and what Aquasana is doing to mitigate this issue.

IN THE UNITED STATES

In March of 2016, spurred by the high amounts of lead found in drinking water in Flint, Michigan, a USA Today Network Investigation found that there were, “almost 2,000 additional water systems spanning all 50 states where testing [had] shown excessive levels of lead contamination over the past four years.”

It’s nothing short of an American tragedy, one that is cropping up in more and more cities around the country. But thankfully (and frustratingly), it’s not without a solution.

But first, here’s how it happened in Flint.

In 2011, in an effort to save a penny, the city switched its water source from the Detroit Water Sewage Department the Karegnondi Water Authority. But before the switch took place, the water would be turned off in the transition period for the entire municipality. So, city officials switched from Lake Huron to the Flint River as a resource. The result was a flood of phone calls to city hall with reports that the water was smelly, bad tasting, and discolored. When tested, it showed high levels of lead and the known carcinogen, trihalomethanes (THMs). You can read the full timeline on what happened in Flint, Michigan, here.

Even though Flint is still in recovery mode, their experiences have rightfully led to many cities more rigorously testing their water, and likewise, discovering that they, too, are dealing with lead poisoning.

According to Reuters, accounts of lead poisoning extend from Warren, Pennsylvania to Goat Island, Texas. And across the United States, “nearly 3,000 areas with recently recorded lead poisoning rates at least double those in Flint during the peak of that city’s contamination crisis. And more than 1,100 of these communities had a rate of elevated blood tests at least four times higher.”

Additionally, the CDC reports that nearly 2.5 percent of all young children have been exposed to lead. That’s nearly 4 million households. The phrase ‘knowledge is power’ has never been truer.

Nearly 2.5 percent of all young children have been exposed to lead. That’s nearly 4 million households.

So why is lead so bad when it enters your body?

LEAD IN YOUR SYSTEM 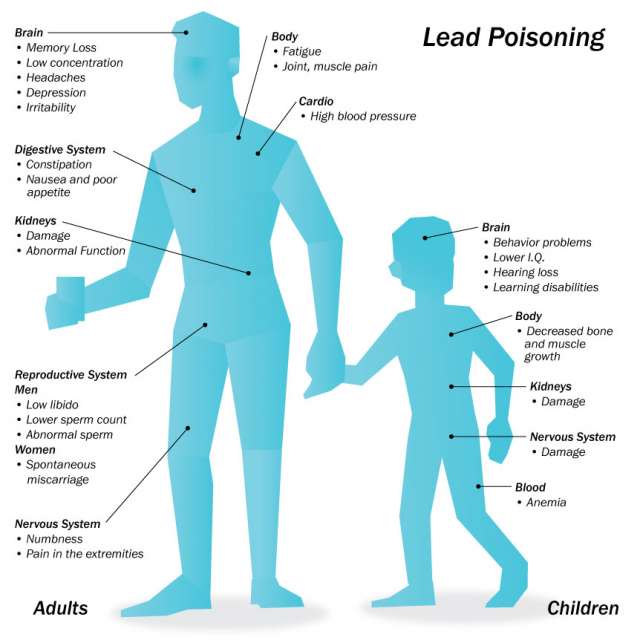 In children, according to the Mayo Clinic, lead poisoning can cause developmental delay and learning difficulties, hearing loss, digestive issues, and abdominal pain. According to the Centers for Disease Control and Prevention (CDC), “there are approximately half a million U.S. children ages 1-5 with blood lead levels above 5 micrograms per deciliter (µg/dL), the reference level at which CDC recommends public health actions be initiated.”

In pregnant women, it can increase the risk of miscarriage and can also cross the placental barrier, affecting both you and your child at the same time.

In adults, low levels can cause high blood pressure, memory loss, fertility issues, and even mood disorders. In high levels, it can cause anemia, kidney problems, brain damage, and even lead to death. Yeah, hard pass. For more information, you can read our top 10 most common myths about lead here.

But let’s take a step back and talk about what lead really is. Lead (Pb) is a naturally occurring element. Soft, malleable, and considered to be a heavy metal, it’s abundant and has many uses. Although it may be “naturally occurring”, that doesn’t mean it naturally ended up in your drinking water without help.

HOW IT GOT HERE

In all honesty, you don’t have to go back as far as Ancient Rome to really understand how lead came to be popularized. The Industrial Revolution was the first time lead was used at the rate that it was back during the Roman Empire. It was during that era that it made its way into our world — and our pipes — once again.

The Water Quality Association reports that, most often, sources of lead contamination are “lead service lines, lead-containing solder, and brass fittings.” In layman’s terms? This means that contamination occurs somewhere between leaving the municipal treatment plant and entering your home.

So what is the government trying to do about it? Legislation in 1986 and in 2011 has banned the use of lead pipes in homes and in plumbing systems, respectively. However, the use of lead before those dates continues to be a problem nationwide, not to mention, homes built after 1986 could still have pipes with lead solder. While the EPA is working to address the issue of our aging infrastructure, their efforts will take time and require substantial resources. The Drinking Water Infrastructure Needs Survey identified “a total of $384.2 billion in capital improvement needs over the next 20 years (2011 through 2031), in addition to the $271 billion in clean water infrastructure investments that will be necessary over the same period of time.”

Most recently, President Trump signed a bipartisan bill that passed the Senate 99-1, called the Water Infrastructure Act of 2018. According to CNN, this bill works to solve two problems at once: lowering the deficit and working to solve the problem of America’s aging infrastructure as it authorizes funds for future projects, expands water storage capacity, and allows for upgrades to wastewater, drinking and irrigation systems. It will do this with the goal of turning, “$200 billion in federal money into $1.5 trillion for fixing America’s infrastructure by leveraging local and state tax dollars and private investment.”

But as the Government works to make money moves, many Americans are still at risk of lead poisoning. Whether your home was built before 1986, or water runs through lead-contaminated pipes on its way from the treatment plant to your home, you’re still at risk.

GET THE LEAD OUT

Municipalities often send out notices regarding drinking water when the public needs to take precaution. Take it seriously. Save the notice and don’t be afraid to call with follow-up questions. Sometimes water suppliers have reason to play down the seriousness of contamination issues. Don’t let complicated wording stop you from knowing the truth. If questions about the notice still linger, take the time to follow up.

Don’t wait to find out. Look for your water supplier’s Consumer Confidence Reports online, or call and request a copy. Check water quality by accessing the Environmental Working Group’s database. Water quality tests also exist – it’s as simple as sending out a sample to find out.

One of the best ways to remove lead from water is to filter it. Though this is something we say often at Aquasana – not all filters are created equal. When it comes to buying a filter, according to CNN, “caution is in order, as not all filtering systems on the market block lead. The NSF lists ratings on three types: reverse osmosis, filter systems, and distillation. It warns that many popular pitcher-type filters don’t meet today’s standards for lead reduction, although they may filter other contaminants.”

Several Aquasana drinking systems have always reduced lead from drinking water – more than 99 percent; that’s not breaking news. That just a part of our mission: to give you healthy, clean delicious water.

Our OptimH2O Reverse Osmosis + Claryum drinking filter, for example, is NSF/ANSI certified to standards 42, 53, 58, 401 + P473 to reduce lead, as well as 87 other harmful contaminants.

And now, our first-of-its-kind  OptimH2O Whole House Lead Filter, is IAPMO tested to NSF Standard 53 to shield your whole house from lead, for clean healthy water from every single tap in your home. Tested and certified to reduce 99.62% of lead and cysts, 98% of PFOA/PFOS, and also tackle 90% of chlorine and chloramines.

For a substance that is tasteless, colorless, and odorless, and with an aging water infrastructure that’s compounding on the problem, it’s more important now than ever to invest in a water filter. 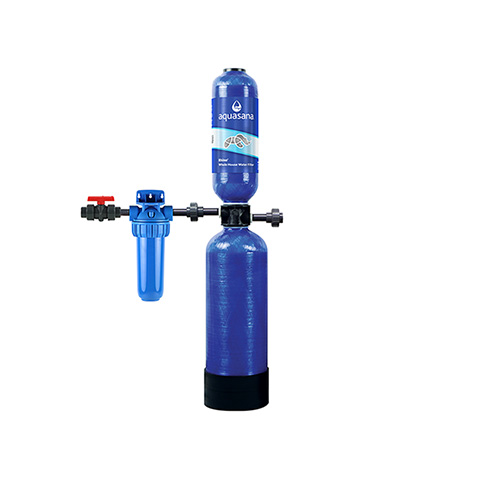 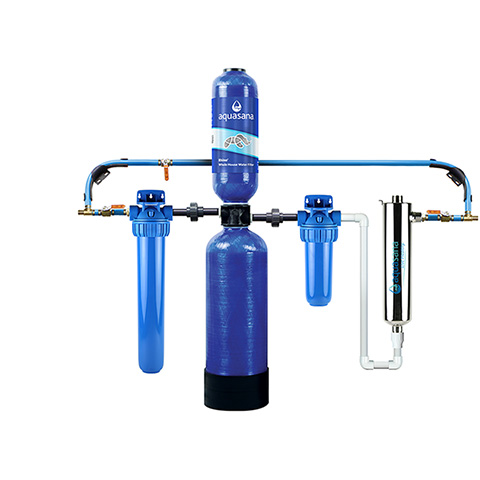