It’s been four decades since lead was officially banned from being used in household items (for example, paint) and later in plumbing materials. Yet today, lead remains one of the most pressing “hidden” threats against homes and families across the nation. Preventing lead poisoning is just as important now than ever. After all, they say ‘history repeats itself’ for a reason.

Take this, for example: According to the Centers for Disease Control and Prevention (CDC), at least four million households have children that are being exposed to high levels of lead. Half a million children, ages one to five, suffer from lead poisoning in the United States. Common-known sources of lead include paint chips, paint dust, soil, and one historically down-played culprit – drinking water. How bad is it? It’s estimated that 63 million Americans have been exposed to lead in their tap water over the last decade alone.

More concerning, according to the Natural Resources Defense Council (NRDC), children drink 2.5 times more water than adults in proportion to their body weight, making them more susceptible to lead poisoning than adults. In fact, the EPA reports that 40 to 60 percent of lead exposure in babies comes from tap water as it’s often used in infant formula.

Even though water is a known source of lead exposure, the facts are still murky for a lot of people. To help clear up common misconceptions about lead in your tap water, here are 10 top lead myths debunked.

Myth #1: There’s a safe level of lead exposure for drinking and cooking.

Truth: While the federal limit set by the Environmental Protection Agency (EPA) of 15 parts per billion (ppb) was created to act as a trigger for water utility compliance, it was not meant as a health-based standard. The EPA has since set the maximum contaminant level goal for lead in drinking water at zero. Lead is a cumulative toxicant that affects multiple body systems, leading experts – including the World Health Organization – to widely agree that there is no safe limit of exposure for children or adults.

Myth #2: Only older homes are affected.

Truth: It’s fairly well known, and confirmed by the CDC, that all houses built before 1978 are likely to contain some lead-based paint. However, according to the EPA, you also should assume that any building less than five years old has lead-contaminated water. Surprisingly, pipes in these newer homes are at an even greater risk for lead because of soldering used to join copper pipes. Mineral deposits eventually build up inside the pipes over time, insulating the water from the lead in the solder. Even though the use of lead in plumbing was banned in 1986, the “lead-free” plumbing parts that have been used ever since then still contain traces of it (legally allowed up to 0.2 percent in solders and flux and up to 8 percent in pipes and pipe fittings).

Myth #3: Lead in tap water is only an issue in the home.

Truth: Public schools, daycares, churches and water fountains across the nation are testing positive for lead-contaminated drinking water, some at exceedingly high levels. In Massachusetts, 50 percent of more than 40,000 tests confirmed lead in schools’ water. In Indiana, 61 percent of almost 1,000 schools had elevated levels, and lead was found in more than half of San Francisco’s public schools. In Texas, 71 percent of schools tested positive for lead in their drinking water.* What’s worse, most schools are not even being tested. Roughly 90 percent of schools and daycares across the country are not required to test under the EPA’s Lead and Copper Rule.

Myth #4: Lead is only a problem in certain areas of the United States.

Truth: There are about 75 million homes across the country built before 1980, meaning they’re most likely to contain some lead plumbing. That’s more than half of the country’s housing units, according to the Census Bureau. Reuters recently identified 3,810 neighborhood areas across the country with recorded childhood lead poisoning rates at least double those found across Flint, Michigan, during the peak of the water contamination crisis between 2014-2015.

Myth #5: If my city’s annual water report is clean, my home is safe.

Truth: Lead found in tap water usually comes from the corrosion of older fixtures (i.e., faucets) or from the solder that connects pipes. Lead levels vary in each home depending on that home’s pipes and plumbing fixtures. Even if a city’s water report passes lead testing, there could still be lead in a home’s metal water taps, interior water pipes, or the pipes connecting the house to the main water line. The only way to know for sure is to have your home tested.

Truth: Private wells are the main source of drinking water for 15 percent of U.S. households (or 47.8 million people), yet only a few states require they be tested for lead. The people in these homes drink, bathe and cook with water potentially containing dangerous amounts of lead. Private wells older than 20 years may contain lead in the “packer” element that is used to help seal the well above the well screen or leaded-brass components. Additionally, corrosion of pipes and fixture parts can cause the lead to enter tap water.

Truth: Although “flushing” can, under certain circumstances, partly reduce lead-in-water contamination, it is not a safe or effective method for preventing exposure. In homes with lead service lines, it could actually increase the risk of exposure by bringing water to the faucet that has had prolonged contact with lead (especially if the flush is not long enough). Lead-leaching is unpredictable. According to the team of scientists responsible for uncovering the water crisis in Flint, “these hazards can be partly reduced by flushing, but can be eliminated by installation of lead filters or removal of lead plumbing.”

Truth: Never boil water with lead, especially for cooking. According to the CDC, heating or boiling water will not remove lead and, instead, increases its level of concentration. Hot water is also more corrosive than cold water and causes lead to dissolve faster, which is why it’s important to not cook with lead-contaminated water and use a completely different source for mixing baby formula. Installing an NSF-certified water filtration system is the only effective way to remove lead from drinking and cooking water in your home.

Truth: Unless combined with a water filtration system, water softeners are not effective at removing lead from tap water. According to researchers at Penn State University, softeners are inefficient lead-removal devices and softened water can, in some cases, be more corrosive than un-softened water.

Myth #10: All water filters these days remove lead, including my pitcher filter.

Truth: Not all water filters are created equal. Many of the filters available today, including leading pitcher brands, are designed to only remove chlorine in order to improve taste and smell – not lead. When purchasing a filter, choose one that has been tested and certified to NSF/ANSI 53 and 58 for the reduction of lead. NSF International is an independent, not-for-profit organization that develops standards, and tests and certifies products to minimize adverse health effects and protect the environment. Visit NSF.org for a full list of water filtration systems that are certified to NSF/ANSI 53 and 58. 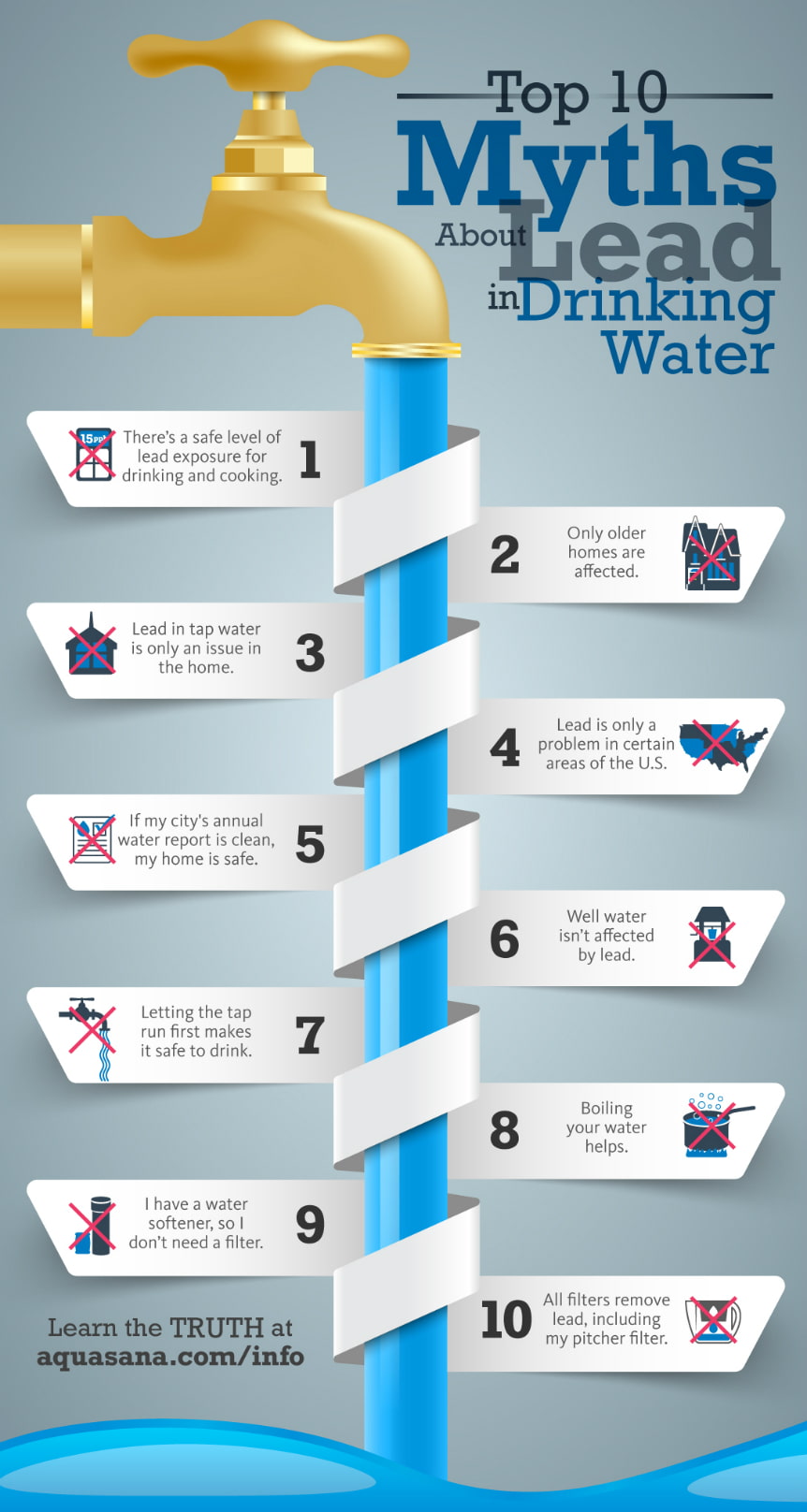